How to Make Art or Is That the Right Question? 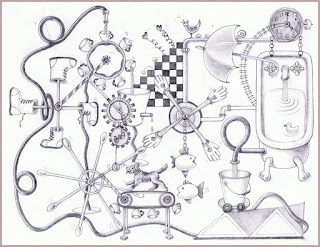 Let’s take painting as our field of expression.  Someone wants to learn how to paint artistically so they take a class on painting, and they learn rather well.  After they finish the course they prepare to construct a painting, buy all the right brushes, paints, and buy a sturdy support as a board for the surface upon which they’re going to paint the imagery.  And these are all the materials the instructor recommended.

They already have a particular subject in mind, it may be their interpretation of a still-life or an expression of their mood, possibly both.  They know how to paint, they have the right tools, and now they have subject and off they go.  The confidence to do so is certainly there, they did very well in the class and are sure they will continue to do so outside the school studio.

Are they producing what we call art?

Now, if there were a school that claimed “study here and we will teach you how to make visual art” that would be quite a claim.  Because if there were a formula or primer or recipe for making visual art I think it would cease to be art.  I would say that would be more like a factory assembly line, similar to a paint-by-numbers image that does not re-present anything that the person wanted to express but only their mastery of the formula and technical skill in using the tools to get that result.

For instance, there have been and are those who are able to draw and paint as well as the 18th century painter Chardin (you may insert any artist’s name here), but they are not half the artist he was.

Don’t misunderstand me, technical skill and having the right tools to re-present an image are notable, maybe even foundational.  Granted, both may be topics for a lively debate—what do we mean by technical skill in the field of painting, what are the right tools?—but here I only mean that these are what are necessary for the painter to achieve the desired imagery, however they construe “technical skill” and “right tools.”

Further, you see images that were painted on a rock surface from, say, 20,000 or more years ago and you think they are beautiful.  You do not know the people who painted these images, don’t have a clue as to why they painted them, but you think that they are art.  Why is that?

And if they are art, who taught them?  Was there a “Bedrock School of Art”?  Certainly, someone tried to do this previously however long before, then after one or several generations of artists they had a handle on painting at least as a craft.  Although most of us would say that many if not all cave paintings fit what our society considers as art, it prods a re-thinking just what we mean by that term.

E.g., did our ancestors think that they were “making art”?   If not, then what does that mean for the notion of teaching others to create art?

Posted by Daniel Raymond Chadwick Art at 7:48 AM No comments:

The Seed and Flower of Surrealism

The late art critic Robert Hughes (1938-2012) concluded about Surrealism in “The Threshold of Liberty,” episode 5 of his documentary The Shock of the New (1980), “So what remains of Surrealism?  Not much.  It became exactly it set out not to be.  A style, and not a very durable style at that. …  Surrealism was completely digested within a matter of 50 years….”

First, there must be an agreement as to the beginnings of Surrealism.  Looking to someone who coined the word then that would have been the poet Guillaume Apollinaire (1880-1918), and his forward-looking approach to the Arts as a progressive human endeavor predates WW1.  Even before Apollinaire, and noting an individual the Surrealists liked to reference, was the writer Isidore Ducasse (1846-1870), aka Comte de Lautreamont, and his Songs of Maldoror (1868-1869).

Also, because of his medical treatments of the depressed and the deviant using “the talking cure” of psychotherapy and the investigation of dreams, the surrealists counted Sigmund Freud (1856-1939) as a foundational thinker.

True, there was nothing quite paralleling these ideas except for perhaps the symbolist painting in the 19th century.  In any case, as an overall intellectual movement the roots of Surrealism began to develop in the late 19th century in the literary approaches of Ducasse and Apollinaire as well as the work of Freud.

And then came the war to end all wars.

World War I, or as more usually labeled today as WW1, spurred several artists and literati to counter the reality of this disaster through the Dada movement.  Hugo Ball, Tristan Tzara aka Samuel Rosenstock, Hannah Hoch, Hans Arp, Marcel Duchamp…well, you get the idea, many powerful creative minds combined to effect the catastrophe in literary and visual venues.  This journey to a reality that is meaningless in terms of naïve realism was one more catalyst to the formation of the surrealists.

Another foundation was the work of the painter Giorgio de Chirico (1888-1978) and his imagery of haunting angst derived from the work of symbolists Max Klinger and Arnold Bocklin.  The odd juxtaposition of people, architecture, and objects led to another vision of the world that Apollinaire called “metaphysical.”  That did not straighten out a popular misunderstanding of that philosophical term, but it stuck.  Displaying people and architecture and objects even more prominently by their unusual placement gave de Chirico’s work the look of a dream.

Thus, following Dada and merging with it, including writers and artists of that movement, a group began to form in Paris in the 1920s, and the crystallization of that attitude was Andre Breton’s Surrealist Manifesto (1924).  Each of those in the group became well known in their fields and among them were Max Ernst (collage), Man Ray (photography), Rene Magritte (painting), Paul Eluard (poetry), Luis Bunuel (film), and of course, Andre Breton himself (literature).

The aspiration was freedom, liberte, in all things.  I do not know offhand if those as Breton or Louis Aragon explored the ancient movement of the Cynics, the “dog” philosophy, wherein one eschewed social convention for the convenience of nature.  I believe it makes for an intriguing parallel, however.

Following WW2, the Surrealist movement broke up as a unified group but the attitudes remained among each as they continued their work.  So, was Hughes right about them?  I don’t think he summed up the result in its entirety.  When I see abstract expressionism, I see the surrealist automatic writing of Andre Masson; when I view an assemblage or collage, I see the surrealist juxtaposition of materials of Max Ernst; when I see time-shifts or dislocations in movies, I see the film of Luis Bunuel; and when I see use of pop imagery, I see any number of surrealist painters as Rene Magritte.

It is now nearly 150 years later since the seeds of Surrealism fertilized the Art world and I see its growth continue in the various arts.  On that score of endurance, I think Hughes was incorrect.  And yet Hughes did add to his evaluation that Surrealism as a movement of the mind, if not of visual art, is “a very durable spirit, and it’s hard to exorcise.”

Posted by Daniel Raymond Chadwick Art at 8:54 AM No comments:

How does one judge Art?  Measuring artwork is notoriously difficult because the standard for art is unlike any other field of endeavor.  In sports one may time the speed or distance as well as the final score.  In the sciences an experiment is either repeatable or not.  And yet, there are items in the Arts that one may calculate.  Can one follow a rule for a ballet move?  Yes.  Is there a particular tone for music?  Of course.  May I distinguish among hue, chroma, and value in color?  Naturally.

None of these formal qualities, however, comprise the essence of what is thought of as “Art.”  And the preference for a unique move, sound, or visual effect becomes subjective to the judge although one may describe these qualities in an objective manner.  Detailing a dance move, acoustical character, or shimmer of color is certainly important when noting what is attractive in an artistic work and that’s all very well.  What does this mean for a preference as to what is Art or, more distinctively, what is “good Art”?

Preference for Art becomes subjective, to be sure, though one finds that most critics may reach a consensus when comparing and contrasting, say, a painting by Frans Hals with the work of Thomas de Keyser.  No offense to de Keyser, but when reviewing and sifting through 17th century Dutch paintings I would say that the consensus is correct.  It is alike listening to the music of Antonio Salieri, whose overtures are playing in the background as I write this.  I can play simple tunes on the piano and otherwise know little about music, but I would say Salieri was a very good composer.  And yet, music critics note that his students Beethoven, Schubert, and Liszt surpassed him.

If I find that I agree with expert critics or with a majority, then while I still may think that Hals was more artistic than de Keyser I need to demonstrate why formally.  That might assist one to understand why I think that way, but why is one formal application better than another?  Apparently, it is because I like it.

Even if I can come up with a set of guidelines as to what is good Art then I will have to account for the long view as to how this compares and contrasts with the history of Art.  I am hopelessly locked into my life, however, and although I can see backward into the past I cannot look forward to the future.  Despite that restriction, I know that what is thought artful today may not be so tomorrow.  Art may suffer less of a depreciation than does fashion but it does change if only just a little.

Posted by Daniel Raymond Chadwick Art at 4:33 PM No comments: 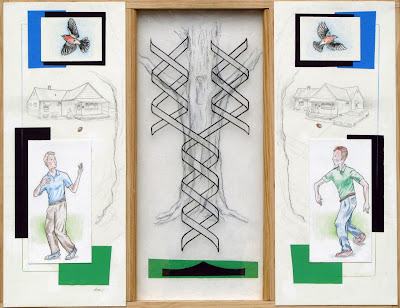 Autumn brings theater openings, football games, and new art exhibitions and this season is no different.  This year my entry the juror accepted for the 29th Regional Artists Exhibition is Double-Play.  The show does not have a particular theme and will run from October 16 to November 20 at the Artists Group Gallery on North Street in Buffalo, NY.  The judge for this exhibit was Burchfield Penney Art director Dennis Kois.

This artwork continues the experiment in the use of a transparency, here I employed a thin acrylic sheet with a DNA helix covering the middle panel drawing of a maple tree.  It is a challenge to overlay one drawing over another without taking away the integrity of each.  Does it work?

And it was enjoyable presenting two different perspectives of the same house while keeping the two connected as one with the figures in the left- and right-side panels.

Posted by Daniel Raymond Chadwick Art at 2:03 PM No comments: 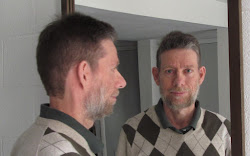 Daniel Raymond Chadwick Art
Originally from the Buffalo, NY metropolitan area, I am familiar with the unexpected blizzard as well as with the breeze of a mild summer. My encounter with the humanities came through my interest in Art and my inquisitiveness about philosophical ideas. How I think about these ideas and ideals may reveal themselves in some images. My wonderful wife and three adult children (and an assortment of pets over the years) have become accustomed to my ways of thinking and doing things. Our current animal resident, Roxy the tortoise-shell cat, puts up with me. Thanks to their love and patience I don't think I would give any of it up for anything.